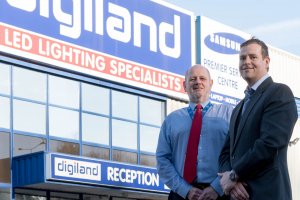 Based in Telford, Digiland is a refurbisher and distributor of electrical goods to large commercial customers and they have an on-site retail shop which is open to the public. It is a Samsung A grade Service Centre and also sells LED lighting.

Digiland is housed in a converted warehouse unit. The offices got very hot in summer and cold in winter. The ageing air conditioning units were inefficient and used the R22 refrigerant, which has now been banned. Although they had a gas fired boiler, there was a heavy reliance on electric heaters to keep the building warm, which meant that energy bills were high.

“Our accountant told us about the Business Energy Efficiency Programme, so I contacted Worcestershire County Council and completed an assessment registration form,” explains David Baxter, the Business Development Manager of Digiland.

The Business Energy Efficiency Programme (BEEP) team then worked with Digiland, a process which included a visit from an energy assessor from the Chamber of Commerce who produced a free energy efficiency report detailing recommended improvements and savings.

“We decided to undertake all of the recommendations in the report so we got quotes and completed the BEEP grant application form,” says David. Digiland’s grant application was successful, and contractors were brought in to begin work on the improvements. Using the grant money, Digiland was able to replace its ageing air conditioning units with ones renowned for their reliability and with a long warranty. The money also funded insulation in the roof voids above the grid matrix ceilings.