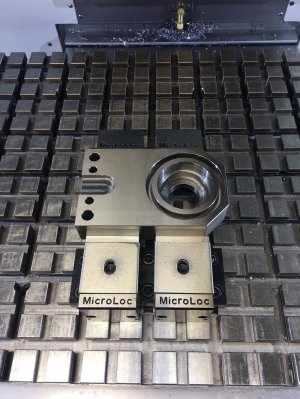 “The new machinery is already helping us with the extra capacity we have. As we are now able to manufacture bigger components, we have been able to take on work that we would previously have had to turn down.”

Three Elms Precision engineers machined components for a range of industries including automotive, food and beverage and air conditioning from its base in Hereford.

Three Elms Precision applied for funding from the Regional Growth Fund’s Green Shoots Plus grants scheme to allow it to buy and install a new CNC Vertical Machining Centre (VMC). The VMC is a hi-tech milling machine that runs on computer-generated programmes rather than manually.

The VMC has allowed Three Elms Precision to double its capacity and a new grid plate and clamping system, installed alongside the VMC, has doubled the speed of production. New easy to use CADCAM software has helped to reduce costs, improve quality and achieve shorter lead times.

Since the VMC was introduced it has already reaped the rewards for the firm, allowing it to accept orders it would previously had to turn down due to the scale of the work. The firm, which employs four full time staff and one part time employee, is now anticipating taking on another apprentice in 2017.

The business-friendly website – www.marchesgrowthhub.co.uk– offers up to date information on grants available in the UK and beyond and how to apply for them. Advisors are also on hand via the helpline on 0345 6000 727 or at one of the Marches Growth Hubs in Shrewsbury, Telford, and Hereford to offer guidance and support for funding applications.