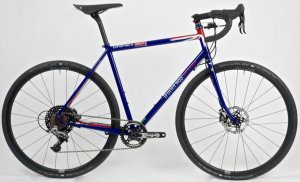 Bicycles By Design in Shropshire is a specialist, bespoke bicycle manufacturer, which prides itself on creating high-quality handmade bicycles in steel in their workshop in the Ironbridge Gorge. It also works with partners in Europe who hand-make carbon-fibre and aluminium tandem bicycles under licence for them.

The company was launched in 1981 by Peter Bird who was joined later by Robert Wade and together they have used their expertise in the bicycle manufacturing sector to create niche products that are gaining a global reputation for excellence and innovation.

It is also launching a new range of premium bicycles, called Ironbridge, which will be made to set specifications and marketed globally.

The company has been working with the Department for International Trade (DIT) since 2008 when the company decided to grow the business by targeting discerning cyclists overseas. Since then, it has made bespoke and made-to-measure bicycles and frames for customers in countries such as Japan, the Netherlands, Belgium and the USA.

As a niche company that provides a very specialist service, it wanted to be able to attract high-end customers in specific overseas markets. Although Rob had international trading experience, he wanted to tap into expert advice to help the business find new markets.

How DIT has helped

Rob and Peter asked DIT for support and Richard Smith, an international trade adviser in DIT’s Shropshire team, was able to access financial assistance so they could visit the US Handmade Bicycle Show.

DIT has also supported the company so that it could attend the Bespoked Handmade Bicycle Show in the UK.

DIT experts have provided translation services so that the company could internationalise its website to attract customers; DIT has also found partners for the company in Belgium and investigated the Japanese market for its range of products.

With the launch of Bicycle by Design’s new Ironbridge brand, DIT is researching markets in the USA, Germany and Japan.

Thanks to the support of DIT’s Shropshire team, Bicycles by Design now exports about 20% of its products. As well as winning new export business, the company is developing its export capability and brand in a very strategic way that enables it to manage growth and innovate with new products.

Rob said: “Working with DIT has given us direct access to business trade shows that we might not have otherwise been aware of and given us access to specialist contacts, which has been very important. We focus on quality, not quantity, and have to be realistic about what we can achieve but working with such a proactive team as DIT means we can embrace new markets.”

DIT’s Richard Smith said: “It is great for us to help an artisan steel bicycle manufacturer in Ironbridge, which is the birth of the Industrial Revolution, realise its global potential. At a time when British Cycling is so successful, Bicycles By Design demonstrate just how even the smallest companies can thrive.”

A Shropshire business is expanding thanks to help from a new Peer Network programme supported by the Marches Local Enterprise Partnership.  Oswestry marketing agency Martin […]