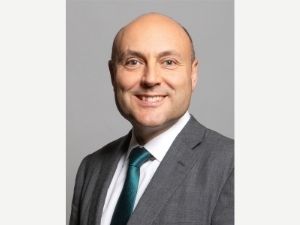 A senior Government politician will give the keynote opening address at a major conference examining the way technology can help tackle the climate change crisis, organisers have revealed.

The free conference, on June 16 and 17, brings together some of the country’s leading technological and environmental experts and has already attracted hundreds of registrations.

Shropshire Council says the unveiling of Mr Griffith as its opening speaker underlines the national importance of the virtual conference.

Andy Begley, Shropshire Council’s chief executive, said he was delighted Mr Griffith had taken up the invitation to speak at the event.

“Andrew Griffith is one of the Government’s key players in driving forward the climate change agenda and to have him speak as the opening guest at this year’s Tech Severn event is a major coup.

“It demonstrates that the conference – and the way Shropshire Council is responding to the climate change emergency by bringing together partners, businesses and key stakeholders to work as one – is creating a real impact both in this county and further afield.”

Mr Griffith was appointed to his post by Prime Minister Boris Johnson to work closely with Business Secretary and COP26 President Alok Sharma to support as many UK businesses as possible to commit to net zero targets.

He previously served as the Prime Minister’s Chief Business Adviser between July and December 2019 and was elected the MP for Arundel and South Downs at the 2019 general election.

Mr Griffith is a former chief operating officer with broadcaster Sky, helping the company establish itself as a leader in taking action on climate and the environment, attaining carbon neutral status in 2006.

The Tech Severn event has generated interest from around the world, with more than 450 people already signed up.

The event, supported by The Marches Growth Hub Shropshire, has been funded through the Shropshire Council-led ARG Economic Recovery Programme and is aimed at businesses of all sizes and sectors, voluntary, community and public sector organisations, schools, colleges and universities and the general public.

To book your place and for more information visit: https://techsevern21.co.uk/