Parents returning to work after extended leave eligible for furlough 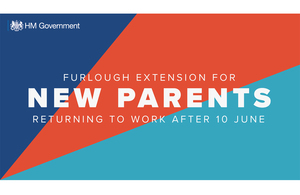 People on paternity and maternity leave who return to work in the coming months will be eligible for the government’s furlough scheme, HM Treasury announced today.

The Coronavirus Job Retention Scheme (CJRS) has been extended until October, with new flexibilities introduced from 1 July to support the economy by allowing furloughed employees to return to work part-time.

To enable the introduction of part-time furloughing, and support those already furloughed back to work, claims from July onwards will be restricted to employers currently using the scheme and previously furloughed employees. This means people must be on the furlough scheme by 10 June.

However, the government today confirmed that parents on statutory maternity and paternity leave who return to work in the coming months after a long period of absence will be permitted to be furloughed.

This will only apply where they work for an employer who has previously furloughed employees.

Chancellor of the Exchequer Rt Hon Rishi Sunak MP said: "When I announced these changes to the furlough scheme last month, I was clear that we wanted to do this in a fair way, that supports people back to work as the country begins to re-open following coronavirus.

"But for parents returning from leave, their circumstances has meant that they are still in need of support, and I’m pleased that they will be able to receive the financial assistance they and their family will need."

The CJRS, which has so far helped 1 million employers across the UK furlough almost 9 million jobs, will close to new entrants on 30 June, with the last three-week furloughs before that point commencing on 10 June.

Businesses urged to get digital help to grow

There is still time for enterprising businesses in Shropshire and Telford & Wrekin to put themselves forward for a prestigious award.