Three Marches companies headed to the United States this month for the first-ever Midlands Engine trade mission to show North American businesses how investing in the region could put them in the fast lane for growth.

Shrewsbury-based Flower & White and Champion & Reeves joined Hereford’s Rayeesa’s Indian Kitchen on on the trip which was led by Secretary of State Sajid Javid MP.

Mr Javid said: "For the first time ever we are bringing the Midlands Engine to the world stage. These aren’t just warm words – over the next 15 years, we plan to generate an additional £34 billion for the Midlands economy. And with exports from the Midlands to both the US and Canada up significantly over the past 5 years, we have a strong record to build on." 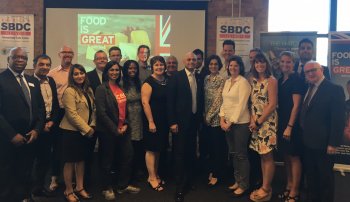