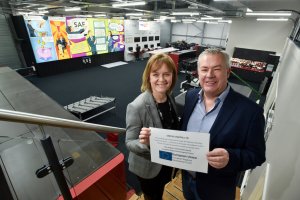 CMYUK, the leading UK independent supplier of equipment to the large format digital printing market, has been able to expand its showroom and create new jobs in Shrewsbury, having been awarded a grant by the Marches Local Enterprise Partnership (LEP).

The grant, worth over £69,000 is part of the Marches Building Investment Grant (MBIG) which was launched earlier this year. It is part funded by the European Regional Development Fund and has allowed significant refitting work to take place at the firm’s Demonstration Centre on the Battlefield Enterprise Park in Shrewsbury.

Founded 13 years ago, CMYUK has grown steadily since its launch to become one of the first equipment and material suppliers to the large format digital printing market. By focusing on the promotion and sale of brand-leading technology, the business has been able to react quickly to changing market needs and, in 2014, due to an increase in business, it launched its Shrewsbury-based Demonstration Centre.

This has proved to be an incredibly important facility, where customers can experience the complete print production workflow in one environment and the firm’s expansion in emerging technology and training facilities has necessitated the recent extension of its facilities. Director Robin East explains:

"Our unique facility located in Shrewsbury has proved so popular since we launched it three years ago, that we could quickly see the benefits to be gained by extending it further. Our vision was to expand the demonstration space to include the latest digital prepress workflow efficiency technology that is essential for our UK customer’s future investment, and allow them to experience the full workflow from digital origination to finished product. This will now be possible thanks to the MBIG grant that we’ve received."

The Marches Building Investment Grant totals £2.5m and is open to businesses across Herefordshire, Shropshire and Telford & Wrekin that need to fund extensions, renovations or reconfigurations of commercial premises.

Speaking of the application process, Robin continues: "We found out about the grant from a local contact and then sought further information from the Marches LEP website. I’m so glad we did, as it’s meant that we could not only expand sooner than we would have otherwise done, but it’s also meant we could expand the size and scope of the project and our demonstration space is now twice the size it was.

"The support we received from the grant’s team made the application process very straightforward. Of course, when you’re seeking this level of investment you need to be prepared to put time and effort in to the application, but having already gone through a thorough business planning process, this wasn’t overly onerous. The encouragement received from Caroline Cattle and her team certainly made it all worthwhile."

The difference that receiving the grant will make to CMYUK isn’t just one of speed of completion and overall scope of expansion. Five new permanent jobs will be created within the first six months of the newly expanded facility, and additional exclusive distribution deals with suppliers are anticipated with the expansion complete.

Caroline Cattle, MBIG Programme Manager, comments: "CMYUK identified a real gap in the market within which they operate. By developing their unique demonstration and training centre, they’ve not only provided customers with a unique environment in which to see the technology in action, but they’ve also successfully strengthened and extended those client relationships, creating the conditions necessary for this expansion."

LEP Director Gill Hamer adds: "CMYUK demonstrated a strong case for carrying out further expansion and refurbishment that would not only benefit their business, but also create jobs and add to the economic vibrancy of the area and supply chain in which they’re operating. I look forward to witnessing their continued growth following this expansion."

Open to businesses trading with other businesses (B2B), the scheme awards grants of up to 45% of the total project costs (to a maximum £100,000) and are intended to cover conversion and alteration costs. They cannot be used towards purchasing property, equipment, or ‘excessive’ landscaping costs. Nor can they be made retrospectively.

Applicants to the Marches Building Investment Grant can be either owner-occupiers or tenants although for the latter, they must have a fixed term lease with at least six years unexpired.

Residential property is exempt from the scheme as are buildings used for agricultural, horticultural, retail or hospitality purposes.

The scheme is expected to attract up to £3m in private sector investment in the region and lead to the creation of 130 jobs. It has been part funded by the England European Regional Development Fund as part of the European Structural and Investment Funds Growth Programme, 2014-2020.

Herefordshire Council is the accountable body for the scheme. Full details are available from Caroline Cattle and Alison Rogers on [email protected] or by calling the Marches Growth Hub team on 0345 6000 727.

Marches SMEs invited to join the fight against climate change