Companies urged to have their say on apprenticeships 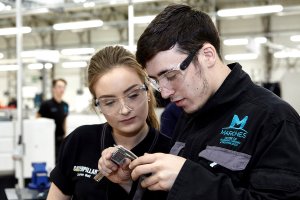 Small businesses which employ apprentices across the Marches are being urged to help test the digital apprenticeship service.

The Education and Skills Funding Agency (ESFA) is launching a trial of the service for small and medium sized employers (SMEs) who do not pay the Apprenticeship Levy and is now asking companies which want to take part to register their interest.

The ESFA says two trials will be held over the summer ahead of the planned rollout of the service for SMEs early next year.

The ESFA said: "Small and medium sized employers that do not pay the Apprenticeship Levy, as well as their supporting training providers, can now express their interest to help ESFA shape its services so it meets future needs for all employers."

To apply to test the service:

The Government has already announced that in future SMEs will be able to access the full benefits of the apprenticeship service, even if they don’t pay the Apprenticeship Levy.

The Apprenticeship Levy is paid by employers with an annual pay bill of more than £3 million and is used to help fund apprenticeships and skills development across the country.

The first test phase will take place between August and December with applications closing on July 5, after which the ESFA will select employers and supporting providers who have starts in August, September and October.

A second window for employers and supporting providers who have starts in November and December will open later in the summer. More information is also available on GOV.UK

Contact us about Companies urged to have their say on apprenticeships