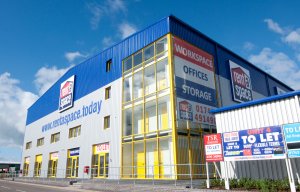 A development in Shrewsbury that will support the creation and growth of businesses as well as providing storage options for the public has opened its doors.

Rentaspace, a £3 million business space and storage centre, has welcomed the first tenants into the purpose built facility in Harlescott.

The Marches Growth Hub played a key role for Rentaspace’s Shrewsbury Manager Leah Whitley as the scheme moved from drawing board to completion.

As well as providing workspace for Leah at the Hub at the Battlefield Enterprise Park, an Economic Growth Co-ordinator at the Marches Growth Hub helped her make important connections at Shropshire Council and shared vital local knowledge to help the project run as smoothly as possible.

Leah said: “The wealth of knowledge available through the Marches Growth Hub allowed me to access targeted and appropriate guidance at all stages of the project.

As I was able to hotdesk at the Marches Growth Hub, I could tap into their local knowledge and contacts and reach the right people at the right time.

“For a new business operating in an unfamiliar area, it was the kind of support I needed but wouldn’t have found under one roof anywhere else.”

Leah also attended a social media course, funded by the Marches Growth Hub, that has helped her make links and connections with potential customers and other local businesses.

The Shrewsbury centre is the second Rentaspace venue to open. The first, in Liverpool, is already fully occupied.

It has four floors, offering 20,000 sq ft on each level, with individual office space including a venue suitable for a call centre.

There are also 300 separate storage units that can rented by businesses or the public.