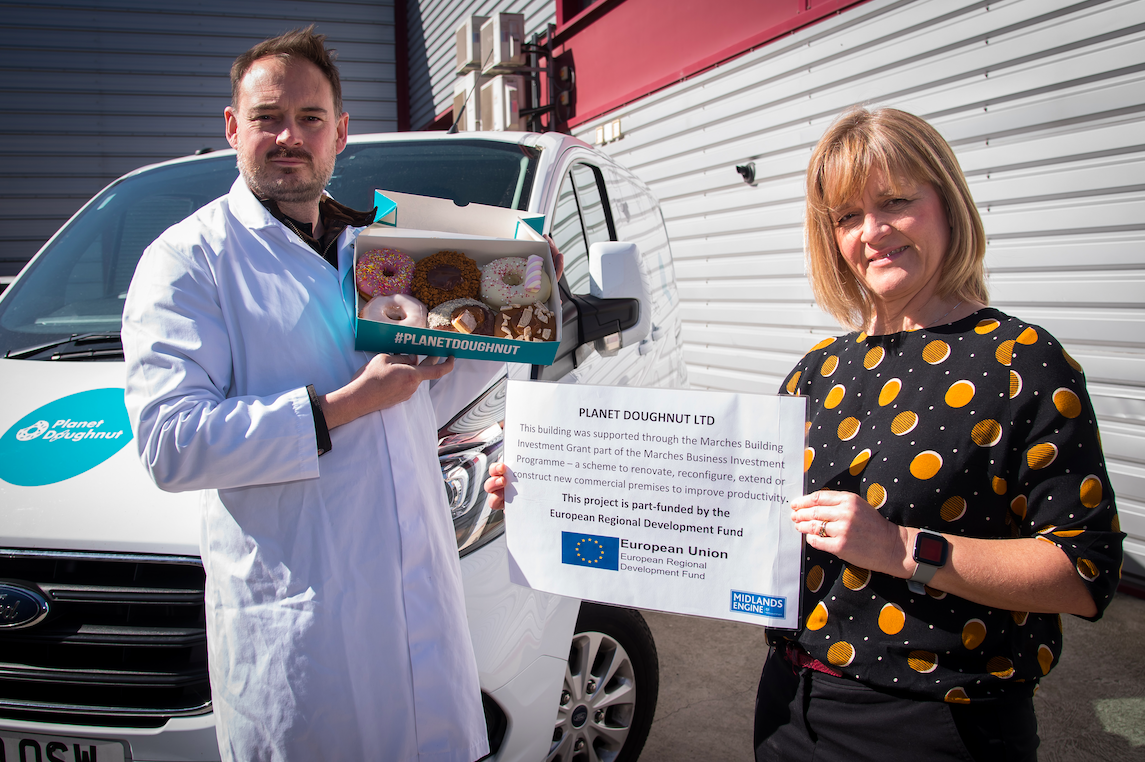 “The Growth Hub has been great for supporting me literally from the get-go.” Duncan McGregor, Planet Doughnut.

· Turnover at Planet Doughnut Ltd targeted to hit £750,000 this year

Artisan bakery Planet Doughnut Ltd has enjoyed a meteoric rise since it was launched by husband-and-wife team Duncan and Samantha McGregor in 2017 in Shrewsbury.

The bakery business itself now employs 32 members of staff – with its sister retail companies employing a further eight at shops in Shrewsbury and Telford, with another outlet due to open in Chester later this year.

The bakery has also moved to a new home at Knights Way on Battlefield in Shrewsbury thanks to support by the Marches Growth Hub Shropshire.

Turnover at Planet Doughnut Ltd had increased to £450,000 as of September 2020 and Duncan expects that to reach £750,000 this year. He has received one-to-one support from the Marches Growth Hub during the pandemic through the hub’s extended team of experts recruited to provide extra support during the coronavirus outbreak.

As a result of the Growth Hub support – and the close working relationship built up with Emma Chapman and Anna Sadler from the Marches Growth Hub Shropshire team – Planet Doughnut Ltd says it is ideally-placed to expand its baking operation still further in the coming years.

The Growth Hub has supported Duncan from the origins of the business on a kitchen table to the current day. Duncan has benefitted from Business 121 support, mentoring, workshop attendance, the Good2Great programme, IP support, help securing the tenancy at the former home at the Food Enterprise Centre and a kiosk in the shopping centre in Shrewsbury.

The Growth Hub has also supported Planet Doughnut Ltd with a successful application to the MBIG programme which has just seen it move to a new purpose-built bakery on Battlefield.

The grant will help with the creation of 10.5fte jobs at the new production site on Knights Way. The MBIG scheme is part-funded by the European Regional Development Fund and supported by the Marches Local Enterprise Partnership and Marches Growth Hub.

This year, Duncan has also been working closely with the Growth Hub through the Covid-19 Business Support programme, receiving 12 hours of one-to-one help.

This has helped him develop a business plan that is resilient in the face of the pandemic and taken him through a variety of grant funding options.

“The Growth Hub has been great for supporting me literally from the get-go,” said Duncan. “They have always been easy to contact and work with and the help and time they have given me has been instrumental in obtaining grant funding and driving the business forward.”

Planet Doughnut Ltd has grown phenomenally in its short life from a home-based start-up to a thriving business which now has room to grow still further at its new production base. This growth has been aided by consistent and ongoing support from the Marches Growth Hub.

New jobs will be created at the bakery this year as the business moves to a 24-hour shift capacity, with exciting plans for the future based around increasing wholesale distribution of pre-packed doughnuts with both major and independent retailers.

Duncan is also launching a postal and doorstep delivery service, covering both the Shropshire area and Liverpool, Cheshire, Birmingham and the West Midlands and a doughnut academy later this year to include corporate events and for children to decorate their own personalised doughnuts.

As a result of Growth Hub support the bakery business has continued to operate through Covid-19 and has had support through grant funding and Bounce Back loans to alleviate cash flow.

“The Growth Hub has been by our side throughout the pandemic as it was before, and the support and advice they have offered has helped us develop the business even during this unprecedented crisis. They have played a key part in all these new developments,” said Duncan.

The Growth Hub’s business support team will continue to work with Planet Doughnut Ltd as the company’s expansion evolves.

“We have lots of room for expansion at our new base so will be looking for support and advice from the growth hub about how to make best use of it as we move forward,” Duncan said.