50 Day Pledge to promote the value of apprenticeships Telford
College is launching a new campaign to celebrate the vital
contribution which apprenticeships are making to the local economy. 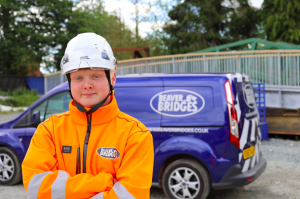 The
’50 Day Pledge’, which will highlight a different success story
every day, officially kicks off at the start of National
Apprenticeships Week on February 3.

Over
the course of the campaign, the college will be spotlighting the many
different ways in which apprenticeships are creating life-changing
opportunities – both for the apprentices involved, and their
employers.

Telford
College currently has more than 1,000 apprentices working with over
400 different companies. Apprenticeships go from level two up to
level five.

The
50 Day Pledge will highlight the breadth of industries and roles
available for apprentices, and showcase the talent and energy which
they are bringing into the Shropshire workplace.

The
college will also be holding a careers fair on February 5 for its
current students and apprentices from 10am to 3pm – before flying
the flag at the All About Apprenticeships show which begins at
Shrewsbury Town football club later that same day.

Some
of Shropshire’s biggest name companies are using Telford College to
train their apprentices.

They
include civil engineering company McPhillips,
a former Shropshire Company of the Year champion. Marketing manager
Mark Kiddie said: "We have been working with Telford College for a
number of years and run a two-year apprenticeship course.

"We
recruit up to 10 apprentices a year and they do a day release here at
Telford College. The remainder of the week they are out on site
putting some of the skills they have been taught here into practice.

"Being
able to practice and reinforce the theory they learn is vital.
Apprenticeships give us the next generation of our workforce."

Peter
McMillan of Avara Foods, the Hortonwood-based food processing giant,
said: "Having been though an apprenticeship myself many decades go,
I see it as a vital bloodline for the company going forward.

"We
need apprentices which are current in terms of the new technology we
are using as we move away from manual labour into automation and the
higher level robotics."

At
office supplies company Lyreco, apprentice Emily Smith was named as
one of the company’s top performers of 2019, and has been promoted
to a role in its credit control team.

Duncan
Milton, from Lyreco’s customer care team, said: "She consistently
hit her objectives and targets monthly, and also consistently
displayed Lyreco’s values day in and day out. She was a pleasure to
have on my team."

Director
Jo Beaver said: "James has been gaining lots of valuable experience
on site recently, and the company will be looking for him to have his
own site team. James has continued to learn new skills such as his
dumper certificate and health and safety awareness."

Graham
Guest, Telford College’s principal and chief executive, said:
"There are dozens more amazing success stories just like these, and
National Apprenticeship Week is a time to recognise and applaud them.

"We
want to make people aware of the incredible diversity of career
options which are now available through apprenticeships, and which
may surprise some people.

"We
also want to show employers the value of reaching beyond traditional
hiring routes – as well as encouraging parents and teachers to look
beyond outdated preconceptions around apprenticeships."